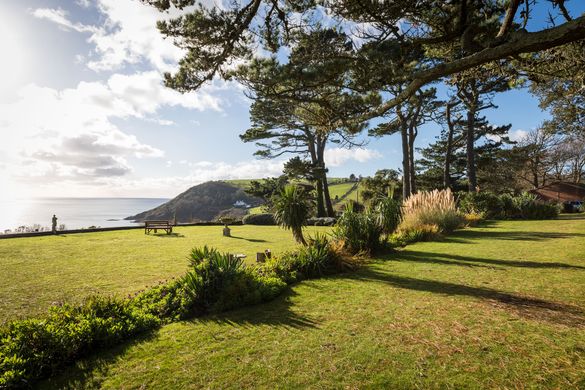 Spring in South East Cornwall means the return of basking sharks as the plankton starts to bloom. It’s also a great time to spot seabirds breeding along the coast. Go now for guided wildlife walks on Looe Island – Cornwall’s only marine nature reserve – and be one of the first to step out on a re-opened stretch of the South West Coast Path, prime wildlife spotting terrain.

South East Cornwall is home to some of the richest marine wildlife in the British Isles. As well as basking sharks, the coast around Looe provides one of the easiest places to see wild grey seal in the whole of the UK.  Take a boat trip or head out to Looe Island for guided walks with a Cornwall Wildlife Trust warden, who’ll share the fascinating nature and history of the uninhabited island, home to grey seals and Cornwall’s largest breeding colony of great black-backed gulls. Walks start again from 29 March and cost £25 per person, including the boat trip from Looe harbour.

Visitors can also spot the marine life from the coast path. This spring sees a section of the South West Coast Path between Looe and the neighbouring fishing village of Polperro (a finalist in Channel 4’s ‘Village of the Year’) re-open following repairs.

Stay in luxury at Talland Bay Hotel, midway between Looe and Polperro and just yards from the path, where eagle-eyed guests can scan the bay for sharks, seals and seabirds through the handy telescope in the lounge. Rooms cost from £220 per night on a bed and breakfast basis. Add a gourmet picnic from £42 per couple and take a taste of the 2AA Rosette restaurant out on a wildlife spotting ramble. www.tallandbayhotel.co.uk