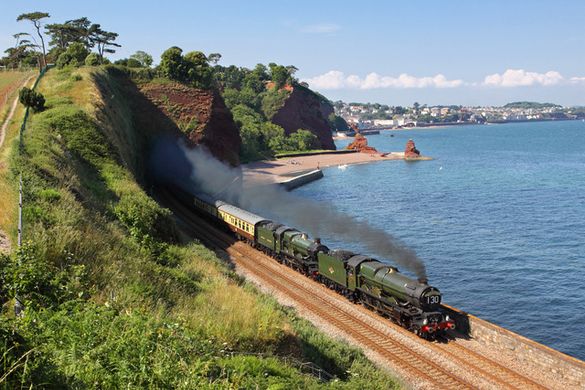 The Steam Dreams Rail Co is offering two new railcation holidays this year, each hauled by two steam engines, offering evocative journeys across England and Wales. Travelling in vintage passenger carriages and ‘double-headed’ by 61306 Mayflower and 45596 Bahamas, there’s a range of ticket and accommodation options from seating in Standard Class to luxurious Pullman Style Dining.

New, this five-day, vintage steam train tour takes in all of the most beautifully scenic routes in Wales including the Heart of Wales line, the famous Barmouth bridge, and the Cambrian and North Wales coast lines. There’ll be castles galore, views of the famously fought-over Welsh Marches plus the opportunity to spend some time – and a few nights – at the Italianate village of Portmeirion.

Inclusions: Train travel days 1, 2 and 4. Accommodation to be booked separately and can be done via Steam Dreams

Depart London Paddington in a vintage carriage for a beautifully scenic journey all the way west including a two-hour break to explore Exeter, traversing the picturesque Dawlish sea wall, before crossing the edge of Dartmoor to Plymouth, then across Brunel’s famous Saltash Bridge, through Truro with great views of St Michael’s Mount before arriving at Penzance.

Excursions include the Lost Gardens of Heligan and the Bodmin and Wenford heritage railway whilst Poldark fans will have the option to tour some of the key locations used in the TV series featuring dramatic cliffs, iconic sandy beaches and ancient landmarks, fully guided by an extremely knowledgeable and engaging host as part of a small group.

Covid : All on-train catering options and service will be guided, and possibly altered, to ensure compliance with the Covid requirements that may apply on the day of departure. The catering described is what we hope to offer.

All Steam Dream excursions are compliant with current government guidelines on social distancing; hand sanitisers will be available in the carriages and lavatories; guidelines for passenger safety are sent with every e-ticket issued and prominent on the trains. Individual bookings that must be delayed due to Covid can be rescheduled to a later date with no amendment fee.

45596 Bahamas was built in 1934 by the North British Locomotive Company in Glasgow for the London Midland & Scottish Railway. 45596 was designed by Sir William Stanier and entered service in 1935. 45596 is the only ‘double chimney’ Jubilee locomotive after being fitted with it in 1961 as part of a trial. This trial was the final attempt by British Railways to improve the performance of its steam fleet.

In 1967, Bahamas was purchased from British Railways for preservation by the Bahamas Locomotive Society. After this, it was sent to the Hunslet Engine Company in Leeds after which it appeared in March 1978 carrying LMS crimson lake livery as No. 5596.  Its latest overhaul (2013-2019) at Tyseley Locomotive Works was supported by the National Lottery Heritage Fund and Bahamas ran again in 2019 on the main line for the first time for 25 years. As No. 45596, it now runs in BR green livery.

Bahamas was the very last engine to be experimented on in BR’s attempt to improve the performance of its steam fleet in the 1960s and its recent overhaul to main line running condition was achieved with support from the National Lottery Heritage Fund.  The loco only runs a limited number of tours each year and when not in action this 1934-built engine is usually based at the BLS Headquarters at Ingrow on the Keighley & Worth Valley Railway in Yorkshire.