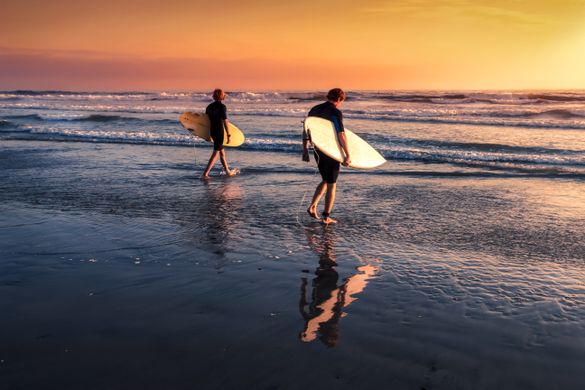 The countries of Central America and the Dominican Republic are an unparalleled tropical experience, their coasts are bordered by the Pacific Ocean and the Caribbean Sea. The region has the best weather conditions and short distances within destinations, making it an ideal combination for surfing. Many lodges and hotels in the surf spots of Central America and the Dominican Republic offer the possibility of combining a surf camp with a yoga retreat. The Rise Up Surf Retreats have idyllic surf camps in combination with yoga classes in Costa Rica, Nicaragua and Guatemala. More information at https://www.riseupsurf.com

El Salvador, a paradise for surfers

The smallest country in Central America, El Salvador, can boast world-class surf spots. During November and December 2019, the country hosted the ISA World StandUp Paddle (SUP) and Paddleboard Championship 2019 (WSUPPC). Once the post-COVID-19 recovery stage has been completed, El Salvador will organize a new edition of the ISA World Surfing Games. The beaches of El Sunzal and Playa La Paz, which are only half an hour south of the capital, are the best known. While surfers at El Sunzal beach find the most consistent waves in El Salvador, which are also very suitable for longboarding, the neighboring beach of El Tunco with its big and wild waves is ideal for experienced surfers. Punta Mango, near the famous Las Flores beach, offers ideal conditions for practicing this sport from March to October.

Surfing on the Pacific and Caribbean coasts in Costa Rica

On the Pacific coast of the Guanacaste region, in the extreme north of Costa Rica, the excellent conditions ensure perfect waves around 300 days a year. But there are also popular surf areas further south, such as the coastal areas in the Pacific between Roca Bruja and Malpaís and between Dominical and Pavones. Naranjo Beach also called Witch’s Rock (Roca Bruja) is a very popular area for experienced surfers with strong waves. Playa Hermosa, in the province of Puntarenas, is also very popular with expert surfers due to its constant waves. On the other hand, milder waves can be found on the Caribbean coast, which is only about 240 kilometers from the Pacific. The best time to surf there is from December to March and if the wind does not blow as hard, you can enjoy the white sand beaches and the turquoise blue sea while bathing and sunbathing.

Surf and beaches in Panama

Panama, the neighboring country of Costa Rica, is also very popular with surfers. From the modern metropolis of Panama City, in an hour or two you will reach some of the best surfing spots in the country. In the north, many national and international surfers are found around Isla Colón. The coasts of the Veragua provinces, in particular Playa Santa Catalina and Los Santos, are equally popular. Santa Catalina beach, a small fishing village in the Pacific Ocean, is considered the best place to surf in Panama. Santa Catalina is also the perfect starting point for trips to the Coiba National Park, which has many spectacular beaches.

Whether professional or beginner, all surfers will find a suitable beach in the bay of San Juan del Sur. Playa Hermosa, on the Pacific coast, offers the best waves in the country and for surf professionals, Popoyo Beach, north of San Juan del Sur, is the place not to be missed. The reason for this is the Parrot Wind, which blows with the same intensity throughout the day and causes big waves. Popoyo Beach hosted the ISA World Surfing Games in 2015. Playa El Yankee, Playa Maderas, Playa Santana, El Remanso and Playa Colorado are also among the best known surf spots in the country.The constant offshore wind across Lake Nicaragua in the interior of the Rivas province offers the best conditions for surfers. In the north of Nicaragua there are still unexplored places to surf. Away from the tourist-developed areas, the Los Clavos Surf Camp and Yoga Retreat is located in the fishing village of Los Clavos, in northern Nicaragua. Surfers can spend the night in four beach bungalows, the camp offers yoga classes every day, and there are seven relatively unknown surf spots nearby (http://www.los-clavos.com). Boom Beach, known for its high waves and A-shaped tubes, is also in the north.

Guatemala, a secret paradise for surfers

The best areas for surfers in Guatemala are located on the Pacific coast on the black sand beach in the fishing villages of El Paredón and Monterrico. El Paredón is located in the middle of the mangroves and can only be reached through a kilometer-long road by car or by boat. The Cocori Lodge offers rental boards and surf lessons for beginners (https://cocorilodge.com). South of El Paredón, Monterrico has a tourist infrastructure developed for surfers and offers hostels and hotels.

Cabarete, is a benchmark for surfing in the Dominican Republic

Cabarete has made a name for itself as a surfing destination in the Dominican Republic and is number one for surfing, windsurfing, and kitesurfing. The former fishing village in the northeast of the country became a hotspot for surfers in the 1980s. Cabarete owes its reputation to the constant trade winds. Playa Encuentro, to the west, is particularly popular with surfers. Numerous events are held in Cabarete throughout the year and there are courses for all levels and for all disciplines of surfing.

Kitesurf and paddleboarding among the idyllic marine scenarios of Honduras

Honduras is an ideal destination to enjoy practicing kitesurfing and paddleboarding (SUP). The Island of Roatan (archipelago of Islas de la Bahía) is a paradisiacal destination surrounded by marine fauna with spectacular beaches of turquoise waters such as West End. This destination provides an opportunity to glide through the waters of the second largest coral reef in the world (after the Australian). This bar skirts the coasts of Belize, Guatemala and Honduras, blocking high waves and allowing a calmer practice of these variants of surfing in Glassy seas.

Slide on the waves of an underwater paradise: Belize

An ideal way to delight in this spectacular destination in Central America is doing kitesurfing, a sport that can be enjoyed on the calm protected waters of its beaches, which are protected by its large reef. The pleasant water temperatures and a constant breeze (especially from January to June), create the optimal conditions for practicing this modality, especially on the islands of Caye Caulker and Ambergris Caye, in northern Belize.

The Central American isthmus is located in the heart of the American continent uniting North and South America, it has 57 million inhabitants in a total area of ​​570,948 square kilometres and is made up of seven countries: Belize, Costa Rica, El Salvador, Guatemala, Honduras, Nicaragua and Panama, complemented by the Dominican Republic. Central America occupies only 2% of the planet’s surface, but is home to 12% of biodiversity globally, with more than 550 nature reserves and the largest coral reef system in the northern hemisphere (the second largest in the world) . Today, the region has 25% of the territory declared as a protected area, 22% of the marine area as a natural conservation and 39% of the forest area.

In this natural bridge embraced by the Pacific Ocean and the Atlantic Ocean, not only flora and fauna stand out. Central America integrates a fusion of numerous cultures, ethnic groups, languages ​​and traditions, reflected in their passion, mysticism, nature, culture, sun, sea, sand, lakes and volcanoes, with populations whose lineages come from various ancestral cultures that make Central America a unique and incomparable region. More than 25 indigenous peoples, traditional dances, imposing colonial buildings, mysterious Mayan sites and internationally known writers are part of the magic of an entire region.

To get to know it in depth, the ideal is to undertake a multi-destination trip discovering the secrets and wonders of each of its eight countries, which add up to 18 places declared World Heritage Sites. An adventure that offers a combination of attractions, services and interconnectivity thanks to its 47 seaports and 29 airports that guarantee the flow of cargo and passengers in the region, which undoubtedly

enrich the travel experience of all visitors.