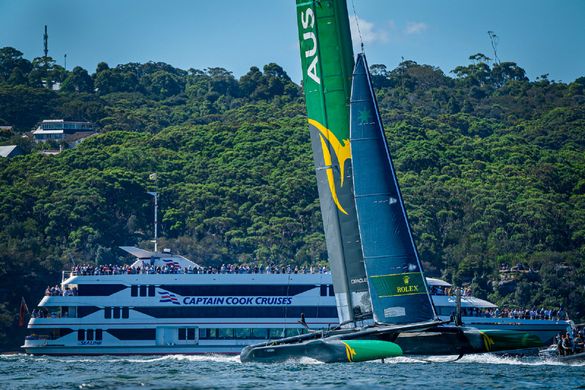 SailGP is back on Sydney Harbour from 28-29 February 2020, and with Australia defending SailGP champions, the countdown is on for the season opener of the world’s fastest and most exhilarating sail racing championship. As the official Sydney SailGP spectator boat operator, Captain Cook Cruises is offering fans the best way to see the action-packed racing with amazing on-water fan experiences.

After a successful inaugural season, this year teams from Spain and Denmark also join Australia, France, Great Britain, Japan and the United States, as they go head to head over a series of thrilling events held at iconic venues across the globe.

SailGP’s curtain raiser on Sydney Harbour will see Australia, led by home-grown hero and Olympic gold medallist Tom Slingsby, look to defend its title as teams compete on identical supercharged F50 flying catamarans, capable of electrifying speeds of up to 100 kilometres per hour, against some of the world’s most talented, athletic and hyper-competitive sailors.

Both passes provide exceptional on-water experiences for adults and families, with boats located in perfect viewing positions inside the public exclusion zone, plus live commentary onboard – fans will be in the centre of the heart pumping racing.

On-Water Go Premium passes are available onboard super-cruiser, Sydney 2000, and include a sumptuous buffet, premium wine, beer and soft drinks and screens to watch the live racing. Sydney 2000 offers spectacular race viewing over four levels including an open top deck with uninterrupted 360-degree harbour viewing. Private viewing rooms are also available onboard, for fans wishing to host a private group.

On-Water Go Passes are available onboard spectator cruisers with drinks available for purchase and an option for guests to bring their own food. Fans can enjoy SailGP from a prime viewing position inside the public exclusion zone and be guided through the racing with an onboard commentator.

All official spectator boats will depart King Street Wharf No.1. at 1.30pm and return at 6.00pm on Friday 28 February and depart 2.30pm, returning at 7.00pm on Saturday 29 February.

SeaLink Travel Group is one of Australia’s most dynamic travel companies, bringing the nation’s best tourism and transport experiences to the world. With more than 1,600 passionate staff across the country, we deliver fantastic services to more than eight million customers annually.  With a vessel fleet of 80 and a coach fleet of 62 vehicles, our Adelaide-based company has undergone a remarkable period of growth, emerging as a significant player on the national tourism and transport scene.

At SeaLink, we believe travel is about connecting people, sharing experiences and creating brilliant memories.  Our operations extend across New South Wales, Queensland, the Northern Territory, Western Australia, South Australia and Tasmania, including: