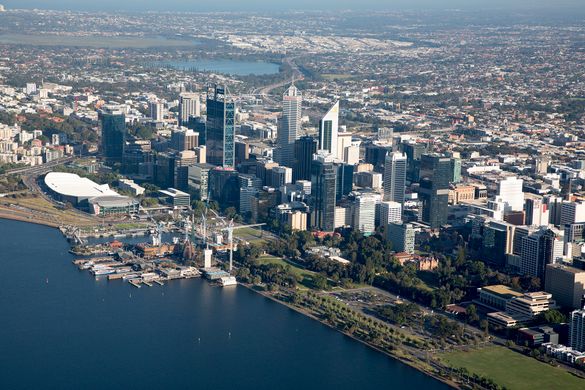 People are talking about Perth. Foodies, investors, sun-lovers, entrepreneurs, creatives – and even locals – are experiencing the ‘wow’ factor as unprecedented investment in WA’s cosmopolitan capital comes to fruition.

Long celebrated as one of the world’s prettiest and most livable cities, Perth is now striding confidently on to the international stage as a leading player in Australia’s cultural, hospitality and events scene. More visitors than ever are marveling at the explosion in attractions, accommodation and nightlife which complements the city’s natural beauty – delivering an all-round, exceptional destination.

So what’s trending in the capital?

Day trips
Few cities have such an impressive range of activities at their doorstep. Journeys between 30 minutes and two hours from central Perth could see you swimming with dolphins in Rockingham, tasting award-winning beverages in the Swan Valley wine region, taking a quokka selfie on Rottnest Island or walking among eerie limestone formations at the Pinnacles. New tours are also showcasing the bushland and culinary creations of the Perth Hills, and it’s now possible to do the Margaret River Region in a day from Perth with sightseeing packages through Swan River Seaplanes.

Accommodation explosion
Perth now offers some of the best value hotel and short-stay accommodation in Australia following the raft of new and refurbished properties that have opened in the CBD and surrounding urban and coastal areas. Not only are visitors enjoying more choice in accommodation, they’re also saving with Perth hoteliers offering up some great deals.

Perth is shaking off its former reputation for costly accommodation stemming from WA’s mining boom, with the average daily rate in the Perth CBD down 16.5% in 2016 compared to 2012 (source: STR Global data). Nowadays, the city is again an attractive option for holidaymakers who will find rooms to suit all budgets.

Since 2012, 24 new or redeveloped hotels have opened in and around Perth, adding more than 2,200 new rooms to the local market. In the next four years, a further 15 new or redeveloped hotels will come online, adding more than 2,300 new rooms. It’s about quality and quantity with a broad selection of boutique, big name and luxury accommodation options coming online including the Ritz-Carlton’s first Australian property in 10 years, The Westin in the eastern CBD and three developments from the DoubleTree group.

Sports tourism
With the deluxe 60,000-seat Perth Stadium due to open early 2018 and impressive international fixtures already locked in, Perth is fast becoming a sport lover’s dream destination. Adding to Perth’s other quality sports venues – such as Perth Arena and nib Stadium – the new stadium is already shaping up as one of the world’s most technologically advanced major venues. Events scheduled for Perth Stadium include:

Fly non-stop from London to Perth
In 1947, Qantas’ maiden flights between Australia and the UK took four days and nine stops. Now it will take around 17 hours, non-stop.

History will be made when Qantas’ daily direct Perth to London flights take off in March 2018, becoming the first regular passenger services directly linking Australia and Europe. WA is ready to roll out the welcome mat for an influx of new visitors as Qantas’ choice of a west-coast hub puts the State firmly on the radar for even more travellers – with the potential to inject up to $36 million a year in visitor spend into the local economy.

Many visitors from Europe are expected to kick-start their Australian experience with a stay in Perth, while people from other Australian states will fly domestically to Perth and stay before connecting to the non-stop London service, the world’s third-longest passenger flight.

Qantas will mobilise its Boeing 787-9 Dreamliner fleet for the 14,500 kilometre each-way journey. Enhanced cabin design, improved air quality, and technology to reduce noise and turbulence are all designed to make the long-haul journey more comfortable for up to 236 passengers across business, premium economy and economy.

Tickets for the Qantas non-stop Perth-London flights are now on sale. At Perth Airport, the non-stop flights will operate through Qantas’ existing domestic terminals (T3/4), which will be upgraded to accommodate the new services. The airline’s other international flights from Perth (to Singapore and to Auckland) will also move to this terminal to streamline passengers’ connections.

Stay up to date at qantas.com

1-2 days: Check out the sights of Perth city, including Elizabeth Quay, Kings Park and its neighbouring cultural hubs of Northbridge, Mount Lawley and Leederville. There is also ample opportunity to catch an iconic Indian Ocean sunset at one the city’s 19 metropolitan beaches, enjoy a seafood feast in Fremantle, take a 25-minute drive to the food and wine mecca of the Swan Valley, and cuddle furry animals at Caversham Wildlife Park.

3-4 days: Why not add a Rottnest Island day trip or overnight stay to your Perth itinerary? With 63 beaches and 20 beautiful bays, there is so much to do and see on this island playground. Or, in less than a 40-minute drive south of Perth, you can swim with wild dolphins off the coast of Rockingham.

A week or longer: Head outside of the city to one of WA’s many spectacular regions. From world-class food and wine in Margaret River, and memorable aquatic experiences along the Coral Coast, to the gold rush history of Kalgoorlie and the Kimberley’s ancient landscapes – there truly is something for everyone in WA.

An expanded Terminal 1 forecourt opened in November 2016 and, nearby, the state-of-the-art T1 domestic terminal is home to all Virgin Australia services, enabling passengers to transfer seamlessly between regional, interstate and international flights with the airline.