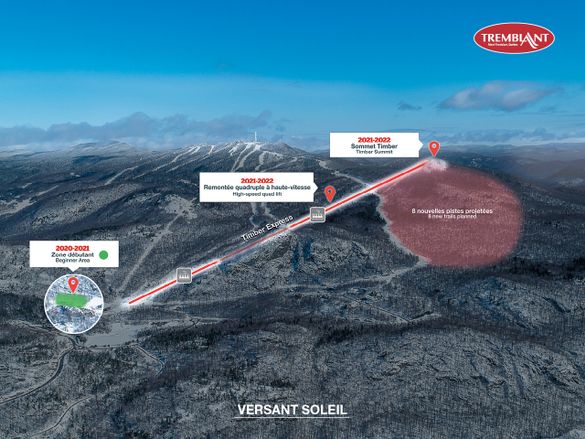 $8.8M will be invested in 2020-21
With a growing demand for easy runs, $1.4 million will go toward a new beginner area at the base of Versant Soleil. Several maintenance projects representing $5.4 million will also be carried out on the ski lifts and buildings, including the renovation of the washrooms next to Café Johannsen. To prepare for the opening of the new Timber Summit for the 2021-22 winter, $2 million will be dedicated to new infrastructure implementation.

Opening of the new Timber Summit in 2021-22
For the great pleasure of skiers and snowboarders, 8 new trails are planned to lead to the base of Versant Soleil and of the North Side. To reach the new summit, a high-speed quad lift will be installed from the bottom of Versant Soleil. A snowmaking system to service this new area is also in the plans. This project, which aims at diversifying the ski area, is part of the continued development of Versant Soleil and reaffirms Tremblant’s leader position as the #1 ski resort in Eastern North America.

About Alterra Mountain Company
Alterra Mountain Company is a family of 15 iconic year-round mountain destinations, including the world’s largest heli-ski operation, offering the Ikon Pass, the globe’s newest season pass that invites skiers and riders to seek the unique of each mountain. The company owns and operates a range of recreation, hospitality, real estate development, food and beverage, retail and service businesses. Headquartered in Denver, Colorado, with destinations across the continent, Alterra Mountain Company is rooted in the spirit of the mountains and united by a passion for outdoor adventure. Alterra Mountain Company’s family of diverse playgrounds spans six U.S. states and three Canadian provinces: Steamboat and Winter Park in Colorado; Squaw Valley Alpine Meadows, Mammoth Mountain, June Mountain and Big Bear Mountain Resort in California; Stratton and Sugarbush Resort in Vermont; Snowshoe in West Virginia; Tremblant in Quebec, Blue Mountain in Ontario; Crystal Mountain in Washington; Deer Valley Resort and Solitude Mountain Resort in Utah; and CMH Heli-Skiing & Summer Adventures in British Columbia.  Also included in the portfolio is Alpine Aerotech, a worldwide helicopter support and maintenance service center in British Columbia, Canada. Alterra Mountain Company honors each destination’s unique character and authenticity and celebrates the legendary adventures and enduring memories they bring to everyone. For more information, please visit www.alterramtnco.com.

Tremblant: Take Me to the Top

Tremblant is part of Alterra Mountain Company’s family of 15 iconic year-round destinations, including the world’s largest heli-ski operation, offering the Ikon Pass, the new standard in season passes. It is a top four-season resort destination owing to its guest experience both on-mountain, and in its pedestrian village. Its view of the Laurentians, the diversity of its offer and highly acclaimed major events – including IRONMAN Mont-Tremblant, Tremblant’s 24 h and the Tremblant International Blues Festival – place Tremblant 23rd among the Best Ski Resorts in the World by Condé Nast Traveler readers in 2019, in addition to being voted #1 Ski Resort in Eastern North America 20 times by SKI magazine readers. With your family, sweetheart, friends or group, Tremblant welcomes vacationers from Toronto on direct flights with Air Canada and Porter Airlines, to enjoy 1,900 lodging units fanned out across 13 hotel establishments, over 75 restaurants, boutiques and a casino, all at nature’s doorstep.