↓
Home→AFRICA→Egypt→Tutankhamun: Treasures of the Golden Pharaoh Presented by Viking Cruises 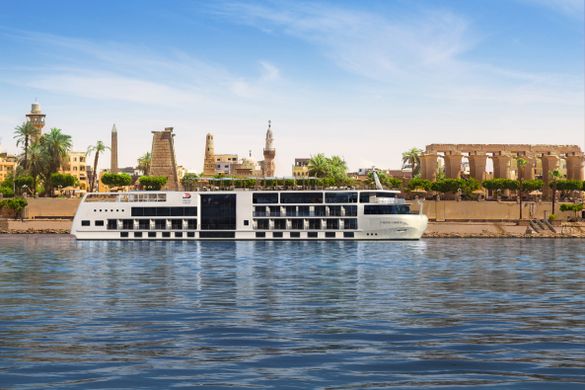 Tutankhamun: Treasures of the Golden Pharaoh Presented by Viking Cruises – Exhibition Opening Marks the 97th Anniversary of the Discovery of Tutankhamun’s Tomb

With more than 250,000 tickets already sold and several five-star reviews, the much-anticipated exhibition TUTANKHAMUN: Treasures of the Golden Pharaoh presented by Viking Cruises opened at the Saatchi Gallery in London on 2 November.  Produced by the Egyptian Ministry of Antiquities and IMG, the exhibition will run through until 3 May 2020 and features the largest collection of Tutankhamun’s treasures ever to travel outside of Egypt.  It is the first time that 60 of the 150 original artefacts from Tutankhamun’s tomb have been seen in the UK.  London is the third stop in a ten-city world tour, which broke records in Los Angeles before becoming France’s most attended exhibition of all time with more than 1.4 million attendees.

Egypt is a popular destination for Viking guests with most of the sailings on its ‘Pharaohs & Pyramids’ itinerary being fully booked a year in advance.  On the 12 day cruisetour guests follow in the wake of pharaohs along the banks of the Nile between Luxor and Aswan as Viking’s expert Egyptologists provide insights into one of history’s greatest civilisations.  The itinerary includes the fascinating city of Cairo, with a visit to the Museum of Egyptian Antiquities.  To meet demand, Viking Osiris, a brand new ship built specifically for the Nile, is currently under construction and will debut at the end of 2020, joining the cruise line’s other ship on the Nile, Viking Ra, which launched in 2018.  Hosting 82 guests in 41 staterooms, Viking Osiris will be a state-of-the art ship with the clean, elegant Scandinavian design for which Viking is known. Viking is the first and only Western company to build, own and operate ships on the Nile.

Viking recently launched a new pre-cruise extension ‘British Collections of Ancient Egypt’ which enables guests to retrace the steps of the world’s most famous Egyptologist, Howard Carter, and his benefactor, the 5th Earl of Carnarvon.  Guests enjoy Viking’s signature ‘Privileged Access’ which offers private viewings and out-of-hours tours of archives and exhibits in world-class institutions including the British Museum and Petrie Museum in London and the Griffith Institute and Ashmolean Museum in Oxford.  They also have the chance to view the Earl’s private collection at Highclere Castle, the ‘real Downton Abbey’, accompanied by an expert Egyptologist.

Wendy Atkin-Smith, Managing Director of Viking Cruises UK, said: ‘As part of our commitment to providing culturally enriching experiences and in line with our destination focus, we are thrilled to present the London leg of the TUTANKHAMUN: Treasures of the Golden Pharaoh world tour.  At Viking we are very passionate about connecting cultures from all around the world so we are thrilled to be giving visitors in the UK the chance to see this priceless collection of treasures, especially as it is the last time they will travel outside of Egypt.  At the end of the world tour the artefacts will go on permanent display at the Grand Egyptian Museum, which is supported by exhibition proceeds.’

Viking’s Pharaohs & Pyramids cruisetour starts from £5,365 per person and the British Collections of Ancient Egypt extension starts from £2,699.  For more information or to make a booking call 0800 319 66 60 or go to www.vikingcruises.co.uk