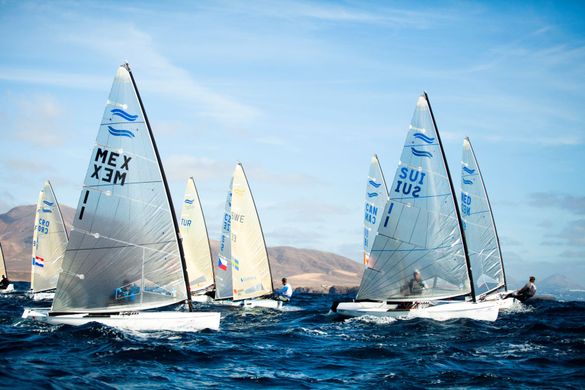 The natural conditions of the Canary Islands, along with its specialised infrastructure for high-level training, make the archipelago a paradise for training and active sports for professional athletes, has led to the majority of the sailing athletes who will compete in the next Olympic Games to choose Lanzarote as their winter preparation.

Mills and McIntyre are currently training in Lanzarote, taking part in a number of practice regattas to prepare for the 2021 Olympics in Tokyo. The conditions in Lanzarote are very similar to those the sailors will face in Hiroshima, Tokyo, where the sailing events of the next Olympic Games will be held, are very similar to those offered by Lanzarote. So much so, that even Japanese teams have decided to change their home for the Canary Islands to prepare for the big event. “Lanzarote is very similar to Hiroshima, with a lot of wind and big waves. Moreover, here we have sun, good weather every day and a lot of activities that allow us to prepare ourselves outside of the water as well. That is why we decided to come to the Canary Islands,” says Eri Hatayama, Japanese sailor of Nacra 17.

Among the sailors training in the Canaries is Irish Olympic Silver Medallist, Annalise Murphy, “We come to Lanzarote because it’s the perfect place to train during winter. Everyday is great, it’s a lot of the time sunny and windy but you also get different conditions; some light winds and some different wind directions so, it’s perfect for training“.

Max Salminen, Swedish Gold Medallist in London 2012 in the Star class, is also in the Canary Islands, training in Lanzarote “It’s something unique. Never before have we athletes gathered in such numbers at the same destination. The word has spread very quickly, and I am sure that great sailors will continue to come here to train for many years to come”.

The truth is, the Canary Islands offer the perfect conditions for professional athletes to train. Athletes enjoy not just sunny days, trade winds, many hours of daylight and great winter weather conditions, but also the opportunity to continue with their training routine at high level accommodation and sports facilities, in a destination committed to health and safety.

“Lanzarote has very good conditions for sailing, especially in these winter months. The Canary Islands are a perfect destination for us, so we have decided to stay here for many weeks, training, so as to be ready when the competitions start,” says Robert Scheidt, five-time Olympic Medallist. Scheidt is one of the greatest promoters of sailing and partly responsible for the fact that the best sailors in the world have gathered in the Canary Islands.

“It’s an extraordinary thing. We have the elite of world sailing here. The vast majority of the sailing Olympians are in Lanzarote, it’s almost like a pre-Olympic event. The natural conditions of Lanzarote and the Canary Islands for the practice of sport sailing are key. Here the teams can maximize their training thanks to the conditions offered by the islands,” says José Juan Lorenzo, Manager of Canary Islands Tourism.

Julia Casanueva, President of the Spanish Sailing Federation, assures that “this is the prelude to the Olympic Games. It is very positive for our athletes that they have managed to gather all the classes of the best countries in Lanzarote and to establish a training base here. In this way, our athletes have the opportunity to train with the best“.

This large influx of sailors to the Canary Islands has led to the Real Club Náutico Arrecife and Marina Rubicón, alongside the Canarian Sailing Federation, to organize the 2021 Lanzarote Olympic Winter Regatta, which took place from January 16th to 28th. The participating classes, 470, 49er, FX, Finn, Nacra 17, ICLA 6 and ICLA 7 have competed in the regatta courses of Arrecife and Playa Blanca.

The men’s 49er class was won by Mihovil and Šime Fantela, gold medallists at the Rio Olympics, while 2016 Olympic champions, Martine Grael and Kahena Kunze, placed first in the ladies FX.

The natural conditions of the Canary Islands transform the archipelago into a paradise for professional training and active sports. In addition to sailors, many other elite athletes choose the Canaries as their training base, including surfers, triathletes, swimmers, paragliders, beach volleyball players and cyclists from all over the world.

There are also national teams or top-level teams, such as the INEOS Grenadiers or the Jumbo-Visma in cycling, which prepare for the major competitions of the season on the slopes of the archipelago. In the Canary Islands, passing quickly from sea level to more than 1,800 meters is very easy due to the archipelago’s volcanic origin. Training at altitude, with lower atmospheric pressure, improves athletic performance, and Teide, the highest peak in Spain, is a favourited by cyclists.

The temperature in the Canary Islands average at 23º in summer and 19º in winter, and the islands receive approx. 4,800 hours of daylight per year. “The Canary Islands has been an established sports tourism destination for many years. We are the only place in Europe that has extraordinary conditions for training in winter.” says José Juan Lorenzo.

The connectivity of the Canaries, even now, allows athletes to reach the Archipelago from London in approx. four hours. The islands have 1,500km of coastline washed by volcanic waters rich in nutrients and suitable for thalassotherapy, perfect for helping athletes with a quick recovery. There are also a wide range of facilities for high-level athletes, including Olympic sailing champion Max Salminen, from Sweden, who trains in the Canary Islands and says “we all feel as if we have discovered paradise”.