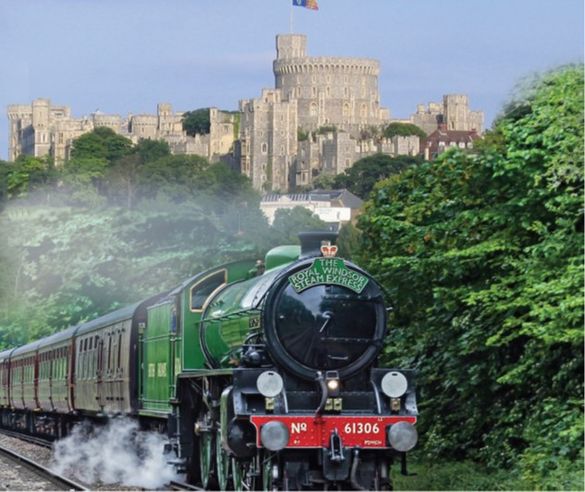 A vintage train service every Tuesday from 1st June to 14th September this year (no service Tuesday 7th September) will offer steam-powered journeys in period carriages from London’s Victoria Station to Windsor.

The first regular steam service from Victoria in over 50 years*, the Royal Windsor Steam Express will leave at 08.00, 11.00 and 14.00, usually powered by Mayflower, a British Rail locomotive built in 1948.

Tickets from £89pp for Pullman Style Dining include a glass of Champagne and Eggs Royale on the morning services or a Champagne afternoon tea on the 14.00 departure. First Class is £59pp including a complimentary tea or coffee table service. Standard seating is available at £39pp with snacks and drinks available to purchase.

Tickets on line or at the station on the day, subject to availability – same day return tickets on the steam service at £25pp Standard class only departing Windsor to London Victoria at 09.30 and 12.30.

*The last timetabled steam service from London Victoria was on 8th. January 1964 to East Grinstead.

Covid note : All on-train catering options and service will be guided, and possibly altered, to ensure compliance with the Covid-19 requirements that apply on the day of departure. The catering described is what we hope to offer.

All Steam Dream excursions are compliant with the current government guidelines on social distancing; hand sanitisers will be available in the carriages and lavatories; guidelines for passenger safety are sent with every e-ticket issued and prominent on the trains. Individual bookings that must be delayed due to Covid can be rescheduled to a later date with no amendment fee.