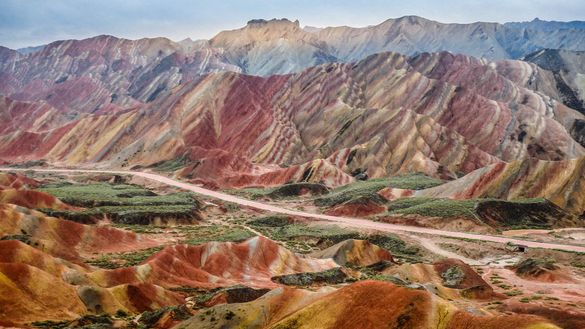 From key tourism developments and exciting new launches to much-awaited film releases and global events, World Expeditions and its two European divisions, UTracks and Sherpa Expeditions, choose below their top destinations for 2020…

WHY: The legend of Mulan strikes back in 2020: the live action adaptation of Disney’s animated film of the same name, which was shot in various locations across China, is scheduled to be theatrically released in March. Set to open next year, the new Giant Panda National Park will cover a vast area more than 10,000mi2 – approximately half the area of Wales or 10 times the size of Hong Kong – while, for the first time in its history, visitors to the Forbidden City will be able to admire the lavish Qianlong Garden complex through a new ‘interpretation centre’. Many visitors will arrive at the striking new Daxing Airport in capital Beijing but the country is also focusing on its rail network, with new driverless trains expected to be introduced in 2020.
LET’S GO: Hike and Bike China with World Expeditions, from remote sections of the Great Wall to the sublime limestone scenery in Yangshuo; departs March-November, 13 days from £2,490 per person

WHY: All eyes will be on Holland next spring, as the country hosts three high-profile events: the Eurovision Song Contest, the Invictus Games and the long-awaited return of the Dutch GP to the F1 schedule after 35 years. From a new exhibition on slavery at the Rijksmuseum, opening next September, to visiting the recently renovated Anne Frank House, there is always something happening at Amsterdam and, with the city banning free tours and restricting guided tours in January, navigating the narrow streets will be much easier. Access should become smoother too: Eurostar aims to begin its long-awaited, non-stop service from Amsterdam to London, while the small Lelystad Airport, east of the Dutch capital, is due to start hosting commercial flights for the first time.

LET’S GO: From the windmills of Kinderdijk to the cheese town of Gouda, immerse yourself in all things Dutch on a Classic Holland Cycle with UTracks; departs April-September, 7 days from £790 per person

WHY: Tourism in Egypt is bouncing back and with two new air hubs expected to be fully operational in 2020 (the Capital International Airport, east of Cairo, and the Sphinx International Airport, close to the Giza Pyramids), getting to capital Cairo will be even easier. The country has recently allowed access to archaeological sites previously closed to visitors – including the distinctive Bent Pyramid and the 4,000-year-old Tomb of Mehu, discovered in 1940 – but the biggest draw will be the most-awaited museum opening for 2020: more than 50,000 artefacts will be on display at the Grand Egyptian Museum, which will showcase for the first time in history the complete collection of Tutankhamen’s belongings since the pharaoh’s tomb was discovered nearly 100 years ago.
LET’S GO: Uncover the treasures and wonders of the ancient kingdom on Egypt Explorer with World Expeditions; departs September-June, 10 days from £1,660 per person

WHY: International arrivals to Pakistan have been soaring in the recent years – rising from 530,000 in 2014 to over 1.9 million last year – and with British Airways returning to Islamabad after more than 10 years and Pakistan International Airlines launching a new route from London to Sialkot, the country’s third-richest city, interest is expected to grow further. As part of its strategy to become a more tourist-friendly destination, the government recently relaxed its entry policy allowing British passport holders to apply for an e-visa, while travel within the country has also become easier for international visitors: although they are still unable to travel within 10 miles of the borders with China and Afghanistan, the extremely restrictive ‘No Objection Certificate’ has now been abolished.
LET’S GO: Find yourself surrounded by the highest concentration of 8,000-metre peaks on the planet on the Ultimate K2 Trek with World Expeditions; departs in June, 24 days from £4,490 per person

WHY: As the ‘Land of the Rising Sun’ gears up to host the biggest sporting event on the planet, change is in the air in the Japanese capital: cashless and smartphone-based payment is becoming widely available, foreign-language signs are more common on the streets and train stations introduce digital signage. In line with the International Olympic Committee’s drive to hold smoke-free Games, ashtrays are gradually vanishing from public spaces, restaurant chains and even convenience shops 7-Eleven. The earlier you visit, the more likely you are to reap the benefits of Tokyo’s new look without the (extra) masses; alternatively, for a crowd-free experience, walk a pilgrimage route such as the Kumano Kodo, which remains off the radar for most international visitors to the country.
LET’S GO: Leave the world behind on a self-guided hike with World Expeditions on the Kumano Kodo Coast to Coast through the scenic vistas of the sacred the Kii Peninsula; departs March-November, 10 days from £1,610 per person

WHY: Five years after the catastrophic earthquakes where nearly 9,000 people lost their lives, the country is gearing up to celebrate 2020 as the ‘Visit Nepal’ year, with the tourism board setting a target of two million visitor arrivals. Although as of next season climbers aspiring to summit Mount Everest will have to adhere to stricter rules, Nepal has gained new fans (of all ages!) thanks to the recent film release of Abominable, which follows the adventures of an adorable yeti as it tries to return home to the Himalaya. New for the 2019-20 trekking season: in addition to launching two exclusive campsites in the Kyangjuma and Pangboche regions, for the first time ever World Expeditions is offering guaranteed weekly departures on the iconic trek to Everest Base Camp.
LET’S GO: Experience the historic route to the base of the world’s highest mountain with World Expeditions on the Everest Base Camp and Kala Pattar trek; departs September-May, 17 days from £1,790 per person

WHY: Celebrating 2020 as the ‘Year of Coasts and Waters’, Scotland is a perennial favourite of productions filming in the UK and has been the shooting location for a number of popular movies and TV shows, from The Crown and Outlander to the next James Bond instalment. Cruise passengers will disembark at the new, state-of-the-part Ocean Terminal in 2020 but travelling to and within Scotland overall is also improving: regional airline Loganair has new domestic routes from the airports of Inverness, Aberdeen and Glasgow; British Airways is boosting its winter capacity between Heathrow and Scotland; while following the recent relaunch of the Caledonian Sleeper, the Highland Mainline will welcome next spring a revised timetable that will improve connectivity and service frequency.
LET’S GO: Head ‘north of the border’, hike through the Scottish Highlands and find your favourite loch along the Great Glen Way with Sherpa Expeditions; departs April-October, 8 days from £670 per person

WHY: The appeal of the Galapagos is timeless: the pristine archipelago represents a spectacular and striking world of volcanic landscapes and fearless animals. More than a century after it was last spotted – its last confirmed sighting was in 1906 – a female Fernandina Giant Tortoise was ‘rediscovered’ earlier this year on Fernandina, the youngest and third largest of the isolated Galapagos Islands. Listed until recently by the International Union for Conservation of Nature as ‘possibly extinct’, the 100-year-old tortoise has been transferred to a breeding centre on Santa Cruz Island. The team behind the discovery is planning another expedition to Fernandina Island in search of new sightings of the until-recently ‘lost’ tortoise.
LET’S GO: If you feel inspired to travel to the far-flung archipelago and search for the ‘lost’ giant tortoise yourself, World Expeditions offers a unique Galapagos – Bike, Hike and Kayak itinerary; departs year round, 8 days from £3,110 per person

WHY: With its Prime Minister receiving the 2019 Nobel Peace Prize, Ethiopia has been in the limelight recently, however the country is already the fastest-growing travel economy globally according to the World Travel & Tourism Council. Recent developments include the introduction of an e-visa system and the opening of a series of new hotels, while the opening of a second terminal earlier in the year has more than doubled the capacity at the capital’s airport; it is now one of the biggest in Africa, firmly establishing Addis Ababa as a regional transport hub: national carrier Ethiopian Airlines has grown to be the largest airline in the continent, serving more than 100 international destinations, including London and, as of last year, Manchester.
LET’S GO: Challenging Kilimanjaro as Africa’s best trekking experience, the trails to the upper flanks of the Simien Mountains and beyond combine superb wilderness with dramatic escarpments; departs September-February, 17 days from £2,780 per person

All quoted prices do not include international flights, however these can be arranged on request.

– One of the very first operators in what is now becoming a very popular area in travel, since its inception in 1975 World Expeditions has earned itself an outstanding reputation as a world leader in small group adventure holidays and cultural journeys.

– World Expeditions remains independently owned and a truly global company, with seven offices around the world, including the UK, Canada, Australia and New Zealand.
– The two factors that distinguish World Expeditions from its competitors, the number of inclusions and the exceptional value of its trips, can be found today in more than 500 stand-alone itineraries across all continents, escorted by expert leaders and meticulously designed for those travellers who want to ‘take the paths less travelled’.

– Always innovative, it was, among others, the first operator to offer cycling holidays in India (1977) and China (1978) and trekking trips in Mongolia (1980), Tibet (1981) and Japan (1999). As of 2011 World Expeditions is the only commercial company to offer the Full Nepal Traverse of the newly mapped Great Himalaya Trail.
– Exclusive to World Expeditions, a number of permanent eco-campsites, designed to increase travellers’ comfort levels, are in operation in the Himalaya (Everest, Annapurna); new design-led campsites can also be found on the iconic Larapinta Trail in Australia.