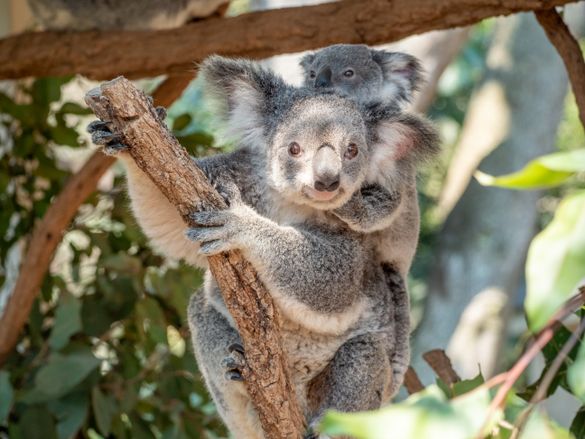 With the new year comes a calendar full of new wild adventures as Queensland’s flora and fauna residents gear up to put on one magnificent show in 2021. So, get out your date planners and diaries because here’s when and where you can watch nature thrive in the Sunshine State throughout the year:

The turtle season in Queensland officially kicks off in November when thousands of female turtles make their annual pilgrimage to Queensland beaches to lay their eggs, but January to March is the ‘grand finale’. The first three months of the year mark turtle hatching season when the baby turtles dig their way to the surface before scurrying across the sand to the deep blue. Turtle hatchings can be seen all along the coast, but keep an eye on the sand when you visit the likes of Heron Island, Lady Musgrave Island, Lady Elliot Island, Fitzroy Island, Green Island and of course Mon Repos, near Bundaberg, to catch a glimpse of this turtley-awesome showcase of new life.

As the state animal emblem, the koala is synonymous with Queensland, meaning there’s no better place to see koala joeys make their entrance into the world. Koala breeding takes place between September and March, and after developing in their mother’s pouch for several months, joeys start to emerge from around March onwards. Welcome these cuddly creatures into the world at one of Queensland’s wildlife sanctuaries or get up close and personal with an adult koala with a koala cuddle encounter.

May, the month of the manta ray

Queensland’s Great Barrier Reef is the place to be if you want to get up close and personal with the ‘birds of the sea’, also known as the magnificent manta ray. The best time of year to see manta rays is May to August when the rays come out to play in larger numbers thanks to cooler water temperatures. See them in action along the Queensland coastline from the Whitsundays to North Stradbroke Island (Minjerribah) and out to Lady Elliot Island – often referred to as the home of manta rays due to the abundant population that call the lagoon home.

There’s no better vantage point to observe the annual humpback whale migration than Queensland’s Hervey Bay. The humpback whale migration season runs from June to November with around 25,000 humpback whales descending on Queensland’s warm waters to mate before heading back to Antarctica with their newborn calves. On their return journey, these magnificent marine mammals pull in for a pit stop at Hervey Bay, earning this calm body of water between the mainland and Fraser Island the title as the world’s first Whale Heritage Site. Visitors can take an exhilarating whale watching tour from Hervey Bay plus other locations along the Queensland coast including Mooloolaba, Redcliffe, Moreton Island and the Gold Coast, or for a closer look you can even swim with the whales.

Whales just can’t get enough of Queensland with the Ribbon Reefs off the coast of Cooktown playing host to the elusive minke whale for just two months of the year (June and July). No one knows from where or why they come, but what we do know is that the Great Barrier Reef is the only predictable known gathering in the world, and Queensland is the only place in Australia where you can swim with these curious creatures. After the first recordings of the minke whales by locals in the 1980s, a Code of Practice was developed for tourism vessels to ensure it is always the whales who are in charge of the interaction. Minke whales are very inquisitive animals and they’ll often swim right up next to you as you float on the surface for a literal ‘eye to eye’ experience. Encounters range from day tours to multi-day trips and should be booked in advance as spots are limited.

The Western Downs region outside of Brisbane, transforms into a drive-by gallery of colourful wildflowers that bloom after the September rain. Admire the purple Boronia and pink and yellow Grevillea amongst an array of other vibrant natives, when you embark on a self-drive tour from the country town of Miles and travel through a spectacular piece of living art.

Look to the October skies and be treated to a spectacular palette of purple as the towering jacaranda trees celebrate spring. You don’t need to travel far from the major cities and towns to walk among the blooms with Brisbane, the Sunshine Coast, Gold Coast and southern Queensland countryside all turning on a spectacular jacaranda display. If staying close to Brisbane city, head to New Farm Park for a picnic beneath the pastel purple canopies or wander through a carpet of lavender at the University of Queensland’s St Lucia campus. Alternatively, see the jacarandas in bloom all year round in one of the Sunshine State’s most iconic paintings, Under the Jacaranda, when you visit the Queensland Art Gallery.

Each year around the November full moon, the world’s biggest reproductive show takes place on the Great Barrier Reef, when a synchronized boom of billions of sperm and eggs explode in a phenomenon known as coral spawning. The event lasts just a few nights and although scientists can predict when it may occur, they can never guarantee the exact time and place, making this the “Everest of natural events” to see. Dive operators along the Great Barrier Reef offer tailored trips ranging from overnight dive tours to multi-day liveaboard experiences. Find out more about the 2020 coral spawning event, one of the biggest in recent years, and discover how you can witness this incredible event in 2021.

The start of turtle season begins with nesting mums

Queensland’s famous turtle season officially starts in November when thousands of mother turtles make their way to the sandy shores of the Queensland coast to lay their eggs at the very same spot where they hatched all those years ago. Nesting season runs from November through to January after which the highly anticipated hatching season begins. Quietly watch nesting at turtle-havens such Heron Island, Lady Musgrave Island, Lady Elliot Island, Fitzroy Island, Green Island and as part of a Turtle Encounter Tour at Mon Repos.

Follow the Bat-Signal to Queensland’s Capricorn region and uncover one of only five recorded little bent-wing bat maternity sites in Australia when you visit Bat Cleft. Located within the Mount Etna Caves National Park just north of Rockhampton, Bat Cleft is home to 80 per cent of Australia’s known population of breeding females, making the area a hub for spotting bats in the wild. Between December and January, visitors have the rare opportunity to see up to 180,000 bats swarm out of the caves at sunset to catch their dinner, a la insect. The three hour torchlight tour is held three nights a week on Monday, Friday and Saturday and must be booked ahead of your visit.