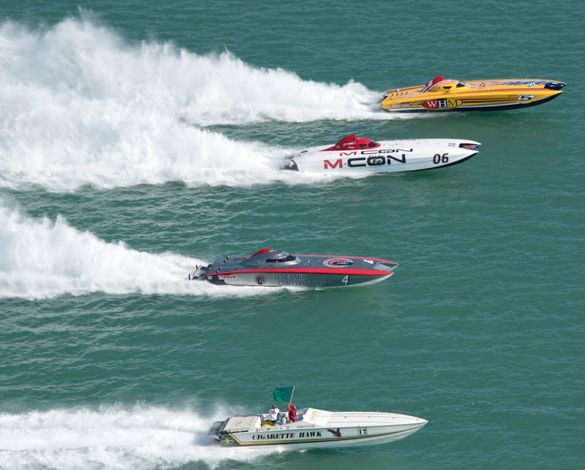 KEY WEST, Florida Keys — Fans of adrenaline, speed and skill are to gather in Key West, sometimes called the Indianapolis of the offshore powerboat racing circuit, Nov. 4-11 for the 38th annual competition to crown the world’s top teams.

The Key West World Championships are to kick off at 4 p.m. Sunday, Nov. 4, with a parade of race boats down the island’s historic Duval Street.

A portion of the challenging 4.5-mile-per-lap course runs through Key West Harbor, meaning smooth water where racers can achieve speeds above 140 mph and fans can watch from vantage points breathtakingly close to the action.

Varying water conditions along the course afford race teams the chance to test both equipment endurance and hull and propulsion design during the season-ending championship series. Boats compete in multiple classes including the celebrated Superboat and Superboat Unlimited classes.

On race days, spectators can get an unmatched view from grandstand areas on Key West’s Truman Waterfront — sitting so close they can practically feel the salt spray as boats roar by. Truman Waterfront is located at the end of Southard Street past Thomas Street and Truman Annex.

Other popular viewing areas include restaurants and bars at harborfront hotels, as well as Key West’s Mallory Square.

On nonrace days, enthusiasts can view the boats, watch in-water testing runs and mingle with racers and crews at the race village, situated at 21 E. Quay Road on Truman Waterfront.